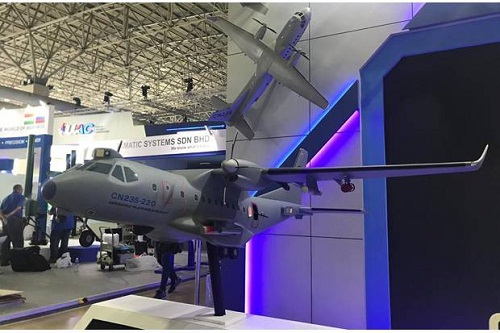 PTDI will participate in the upcoming International Defence Exhibition (IDEX 2021) showcasing its flagship products and services to expand markets and increase sales, which runs between February 21-25, 2021, located at Abu Dhabi National Exhibition Centre.

PTDI exhibit in the Indonesian Pavilion Booth number 03-C31 featured products from across the company’s scope of business, including scale models of the basic airframe of CN235-220, CN235-220 Maritime Patrol Aircraft (MPA), NC212i and N219 which successfully obtained the Type Certificate (TC) issued by Directorate General of Civil Aviation (DGCA) under the control of the Ministry of Transportation of the Republic of Indonesia on December 28, 2020.

The population of PTDI products in United Arab Emirates (UAE) is currently 7 units of CN235, which 6 units for Military Transport configuration and 1 other unit for VVIP configuration, operated by the UAE Air Force. There is enormous potential for replacing the existing aircraft with the same class as CN235 in the Middle East region, include 4 units of CN235 produced by PTDI which have entered the aging period (up to 30 years). With the CN235 exists in UAE, there is also potential for PTDI to deal with spare part business, components repair, maintenance and provide engineering support to those aircraft, strengthened by the agreement between PTDI and Advance Military Maintenance, Repair & Overhaul Center, LLC. (AMMROC) in 2019, which can be used as an opportunity to increase customer support business in UAE and Middle East Region. Moreover, there is also the potential in replacing aircraft with the same class as NC212i operated in the Middle East region.

PTDI will also promote the N219 with the capacity of 19 passengers that already have met CASR Part 23 (Airworthiness Standards for Aeroplanes in the Normal, Utility, Acrobatic or Commuter Category), which later will be strived for massive marketing in order to get a procurement contract.

“IDEX 2021 is such a substantial event for the defence industry, CN235-220, NC212i and N219 are expected to receive special attention from any other countries, include the after sales services for those aircraft, especially in Asia and Africa as our priority markets,” said Elfien Goentoro, PTDI President Director.

Headquartered in Bandung, Indonesia, PT Dirgantara Indonesia (Persero) is one of the indigenous aerospace companies in Asia with core competences in aircraft design and development, aircraft structure manufacturing, aircraft production and services for both civilian and military of light and medium turboprop aircraft. Since established in August 1976, under the auspices of the Ministry of State Owned Enterprises, we have successfully developed and grown our capability as an aerospace industry by delivering more than 450 units of aircraft to many customers all around the globe.